MARIUPOL, Ukraine – Newborn Veronika curled against her mother’s side on Friday, as if to hide from the horror around them — the war that tore apart the Mariupol maternity hospital where she was meant to greet the world.

On the eve of giving birth, her mother, Mariana Vishegirskaya, had to flee the hospital when a Russian airstrike hit.

Her brow and cheek bloodied, she clutched her belongings in a plastic bag as she navigated down the hospital’s debris-strewn stairs in her polka dot pajamas on Wednesday.

Images of the desperate mothers and medical workers from the Children’s and Women’s Health hospital shocked the world, as the bombing took Russia’s war against Ukraine to a sickening new level.

Taken to another hospital, Vishegirskaya and another woman who escaped the bombing have since given birth, their babies delivered to the sound of shellfire. A strike hit the new site where they were taken, too.

Facing worldwide condemnation, Russian officials made several false claims — that the hospital had been taken over by far-right Ukrainian forces to use as a base and emptied of patients and nurses.

The Twitter account for the Russian Embassy in London claimed she was not a victim, but a beauty blogger and model who was posing as two different pregnant women.

While Vishegirskaya is a Ukrainian blogger in Mariupol who posts about skin care, makeup and cosmetics, there is no evidence that she was anything but a patient at the hospital. She has posted multiple photos and videos on Instagram documenting her pregnancy in the past few months, and in one, she can be seen wearing the same polka-dot pajamas as on Wednesday.

The embassy posted side-by-side images of two Associated Press photos, one depicting Vishegirskaya and another of a woman being carried away on a stretcher, placing the word “FAKE” over them in red text. The caption claimed: “The maternity house was long non-operational” at the time of the strike.

The embassy followed with a second tweet in which it shared a photo of Vishegirskaya wrapped in a blanket outside the hospital alongside an image from her Instagram account to suggest she was playing a role.

AP reporters in Mariupol who documented the attack in video and photos saw the victims and damage first-hand – and nothing to indicate the hospital was used as anything other than a hospital.

Twitter has since removed the Russian Embassy’s tweets, and existing links are directed to a notice that says the posts violated Twitter’s rules.

The AP was unable to determine the identity of the woman on the stretcher.

The case drew attention at the U.N. Security Council, where Russian Ambassador Vasily Nebenzia held up copies of the AP photos during a meeting on Friday while repeating falsehoods about Vishegirskaya’s identity and the attack.

But U.S. Ambassador Linda Thomas-Greenfield praised the media for “documenting the truth on the ground,” and adding: “Russia cannot cover up the work of AP news photographers.”

After the bombing, Vishegirskaya was taken to another hospital on the outskirts of the city, facing the front line, and gave birth via cesarean section in a city that’s been cut off from food supplies, water, electricity and heat for more than a week.

On Friday, her husband, Yuri, lovingly held up his daughter, then she was tucked back next to her mother.

Vishegirskaya, in same the polka-dot clothing, rested her arm on the bundled-up Veronika. 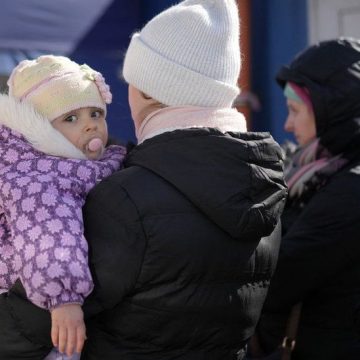